Our goats have been to six states at some really interesting places & this year we were in Manhattan.
Hiring Goats to Clear an Overgrown Backyard - WSJ.com

Rent-a-goat.com and Others Bring in Herds to Trim the Yard, Get Rid of Weeds

Recently, the patch of weeds behind Steve Holdaway's Chapel Hill, N.C., home grew so unkempt that he hired outside help. For six hours, the crew's members tackled tall grass and thorny blackberry plants and toiled without a break—other than to chew their cud, that is. 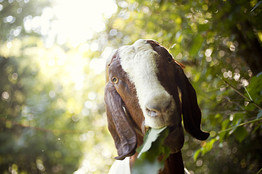 As more homeowners, businesses and towns seek to maintain land with fewer chemicals or fossil-fuel-powered machinery, a growing number are trying goats to get rid of unwanted vegetation. Internet rivals Google Inc. and Yahoo Inc. hired herds to clear around their Northern California headquarters this year. So did the Vanderbilt Mansion, a national historic site in Hyde Park, N.Y. And this April, nannies and billies were deployed at the U.S. Naval Base Kitsap Bangor in Silverdale, Wash., to annihilate pesky scotch broom plants.

While predators, poisonous plants and peeved neighbors can test goats on the job, the small livestock are well-suited for such labors.

Easy to manage, they relish prickly brush and weeds and their agility makes them "popular employees" for navigating steep slopes that can thwart humans and machines, says Brian Faris, president of the American Boer Goat Association in San Angelo, Texas.

It cost 55-year-old Mr. Holdaway $200 to clear a 1,700-square foot swath on his land with goats, pricier than the weed-whacking he's been doing himself for a decade with a gas-powered trimmer. "But like many organic practices, you are going to have to pay a premium sometimes," Mr. Holdaway says.

Livestock owners and towns plagued with brush fires or invasive species like kudzu have rendered goats' services for years. Now new interest among the eco-conscious is giving rise to a cottage industry of rental operations—since unlike lawn mowers, you can't just buy a goat and park it in the shed come wintertime. Some owners say business is so good, they're angling to license and expand with sheep, which do particularly well trimming grass.

In Vernonia, Ore., Lewis Cochran started Vegetation Management Services Inc. with his dad in March after he lost his truck-driving job. He studied goat management online and is now the boss of nearly 50 critters, charging between $6 and $10 a head per day.

Back East, 22-year-old entrepreneur Matthew Richmond teamed up in June with a retired livestock owner he found on Craigslist to launch rent-a-goat.com in Chapel Hill. "It's more of an upper-middle-class fad that we are seeing," Mr. Richmond says. 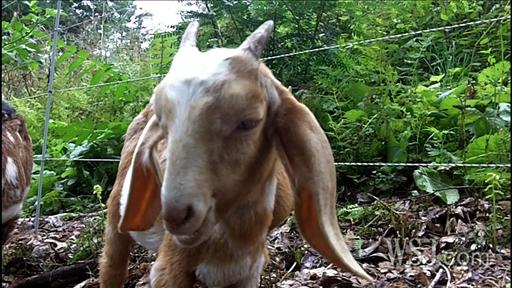 Generally, companies truck goats to work sites (some gas required) where the animals munch inside portable fencing or electric netting, often powered by solar panels. Prices can range from $200 a day for a dozen goats to upward of $1,000 for larger herds of 100 or more. On bigger projects, animals may stay overnight supervised by the business owners or specially trained guardian dogs.

At Vanderbilt Mansion, where a small herd currently grazes on seven hilly acres, the job's $9,000 annual price tag is about two-thirds what hired manpower would run, says Dave Hayes, the estate's natural-resource program manager. "And the goats are a lot more popular."

They're also gentle. Casey Brewer of Duvall, Wash., hired The Goat Lady LLC to clear half an acre overrun with salmonberries. The tally came to just over $1,000 for three days, and Ms. Brewer says the goats didn't harm her cherished old-growth cedar stumps.

"It's a wonderful alternative to bulldozing the property," she says.

There can be snafus. Josh Farmer, 49, runs The Goat Lady with his partner Jill Johnson, an eighth-grade schoolteacher. While electric netting and an Anatolian shepherd dog protect their goats from predators or household dogs, neighborhood children pose a unique threat. "There are those who think it's fun to unplug my electric fence just when it gets dark, letting goats escape," Mr. Farmer says.

And some plants are toxic to goats including ornamentals such as azaleas, oleanders and rhododendrons. Lois Anne Keith paid about $14,000 to bring in 130 goats from Rent-A-Ruminant LLC for several weeks of clearing around her 25-acre Woodinville, Wash., property. The experience went smoothly, except one evening when four goats got sick munching old rhododendron stumps because they were hidden by blackberries. Fortunately the owner, Tammy Dunakin, was sleeping on site in a truck and had medicine to give the goats.

"It's not a simple line of work," says Ms. Dunakin, who expects to gross just over $100,000 this year, her sixth in the business, and is developing an "affiliate" model to train others in goat brush-clearing. From setting up fencing to giving goats shots, water and mineral supplements, she says, "there are a lot of mistakes people can make."

Town and city rules about livestock vary. Often animals can't be raised on property not zoned for agriculture use—but are allowed to visit. In 2004, some residents of the Pacific Palisades, Calif., enclave Marquez Knolls complained, unsuccessfully, to city officials when a resident temporarily parked a trailer with her brush-clearing goats on the street. At night, coyotes circled the truck, recalls Haldis Toppel, president of the neighborhood association. "This is a residential area with dogs, cats and kids and there is a safety factor," she says. 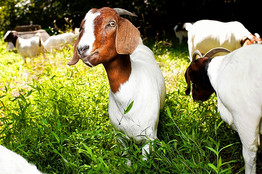 A growing number of eco-conscious homeowners like Steve Holdaway in Chapel Hill, N.C., are trying goats, like these Boer goats, to munch back their weeds. 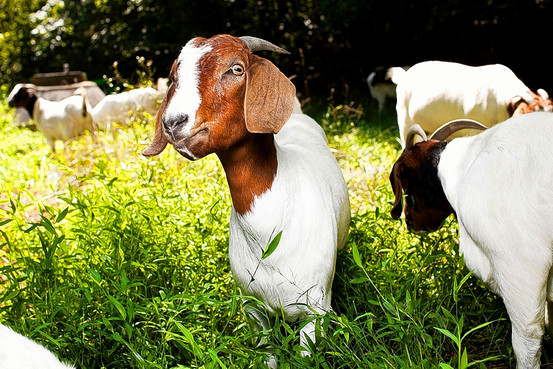 And then there's the poop factor. Some research shows reduced viability of weed seeds ingested and passed by goats in tiny pellets. Owners say some cities have waste requirements. Chattanooga, Tenn., requires property owners "remove and dispose of droppings" as needed to avoid health or sanitation problems.

Still, for many homeowners, goats are worth the cost and occasional mishap. Pamela and Dennis Holst banded together with neighbors last summer to clear a dense patch of brush, including poison oak, around their Santa Barbara, Calif., homes. The couple, whose house burned in 1990 from a brush fire, paid $495 to Brush Goats 4 Hire for their one-third-acre share. Despite a goat getting loose one night, Ms. Holst, who has watched her husband "slip-and-slide down the hillside" with a weed-whacker and herbicide, declares the animals "well worth the expense." (The owners came and retrieved the fugitive goat.)

For his part, Mr. Holdaway of Chapel Hill says the goats did a fine job on his property, and that the neighbors "were amused." Still, given the tall grass in his yard, the goat company returned with a scythe to neaten up. "What you end up with is not a lawn-cut look," Mr. Holdaway says. "It's a munched look."

Write to Gwendolyn Bounds at wendy.bounds@wsj.com

This copy is for your personal, non-commercial use only. Distribution and use of this material are governed by our Subscriber Agreement and by copyright law. For non-personal use or to order multiple copies, please contact Dow Jones Reprints at 1-800-843-0008 or visit

The latest news and analysis delivered to your in-box. Check the boxes below to sign up.